In the past decade since the Global financial crash, the buy to let sector has gone through wholesale change. This has been one of the most challenging periods for Landlords when compared to the previous decade of 2000 to 2010.

Roll the clock back 20 years and Buy-to-Let was the gift that kept on giving. These were the days of record yearly house price growth and no questions-asked lending. Everyone wanted a seat on the Buy-To-Let gravy train that allowed you to make money whilst you slept.

Since 2016, we‘ve seen Stamp Duty hikes on 2nd homes, tightening of mortgage credit, stagnating house prices and punitive taxation rules hacking away at Landlords returns. This has caused some Landlords to sell up and others discouraged from expanding their portfolios. With a tidal wave of  legal changes coming into effect this year, the pain for Landlords shows no signs of abating. There is a stark contrast between the past two decades. It’s hard to deny that it’s much tougher for Landlords to turn a profit nowadays, though is this the beginning of the end for Buy-To-Let?

To get a clearer picture, I thought to look at the trends since the beginning of the 20th century. In the past 100 years, the private rented sector has gone through similar cycles of boom periods, followed by Government intervention. In the 1920’s many people rented, and it was a boom time for Landlords.

During the two World Wars, very few houses were built and with the many that got demolished, housing was in very short supply. Private lets were lucrative, though this was soon followed by Government intervention giving more rights to tenants and diminishing Landlords returns. This saw the Increase of Rent and Mortgage Interest (War Restrictions) Act 1915 introduced, capping rents.

Fast forward to the 1950’s, Britain was in a post-war house building boom (social and private). By the 1970’s and throughout the 80’s we saw the gradual rise of the homeowner. There were low interest rates at various periods during the two decades and ,most notably ,The Right to Buy, introduced by former Prime Minister, Margaret Thatcher. This saw social housing stock depleted to record low levels and homeownership rose to 65.7% by 1988, compared with just 9% in the Private Rented Sector. See the graph below that shows Britain’s housing stock by tenure from 1951 to 2017 with changing trends over time.

The Housing Act 1988 saw the deregulation of private rentals, scrapping rent caps and giving Landlords the right of possession. This was the foundation of the Buy-To- Let sector and with specialist mortgages for Landlords introduced in 1996, the Buy-To-let boom had arrived. The financial crisis of 2008 saw a tightening of mortgage credit and since then a tidal wave of Government regulations and punitive tax rules have made it less attractive to invest in property.

Fundamentally, falling homeownership and the chronic lack of social housing are what underpin the Private Rented Sector. Despite Landlords current woes, I’m confident that we can look forward to better times ahead. According to the Office for National Statistics (ONS) forecast, the UK population will rise from 66.8 million to 75.3 million by 2040.

Whilst home ownership is falling, Britain’s housing market has its fair share of struggles with low supply of new homes and affordability issues. Currently, the average UK house price stands at £233,000, with only 25% of 25-36-year olds qualifying for a mortgage. 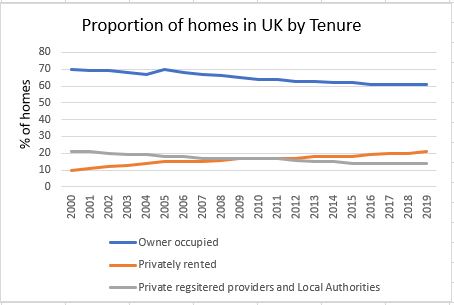 The average rent in the London area currently stands at £985 per month. Tenant demand remains strong and rents have risen to record levels. Whilst the Governments assault on the Private Rented Sector has been a bumpy road for Landlords, Buy to Let will likely stagnate soon. While there will be continued challenges for landlords in the short and mid-terms, the long-term demand for the sector is obvious.

History often repeats itself, and as we’ve seen, The Private Rented Sector always makes a comeback.

For more articles like this visit my blog https://www.ashmoreresidential.com/blog/ or if you fancy a chat give me a call on 020 8366 9777 or email me [email protected]